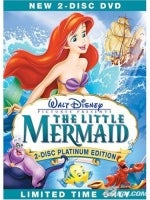 I am sad to admit I’m actually a fan of the movie “The Little Mermaid”. But I am, so I’ll get over it.

I have twice gone hunting for copies of this movie after the limited release had sold out. I once paid $280 for a sealed copy of the VHS release from 1992 for a friend of mine. The second time was not so bad, and only involved rummaging through the boxes upon boxes of DVDs at J&R right before Xmas in 2001 because I had remembered seeing a copy ten months beforehand and, sure enough, I found it and got it for my niece. I am reasonably sure she watched it once and never watched it again, liking Shrek far more.

What’s the point of this? Seven years have passed since The Little Mermaid was last released, which means there is now another limited release, 2-disc edition of the movie. I still like it, and still find Sebastian pretty darn funny, so I’ll be grabbing my very own copy (finally). If you liked it, you should, too, because this movie sells out every time. e-bay made it cheaper, but you’ll still pay fifty bucks two years from now when your baby grows into a toddler, so you may as well.